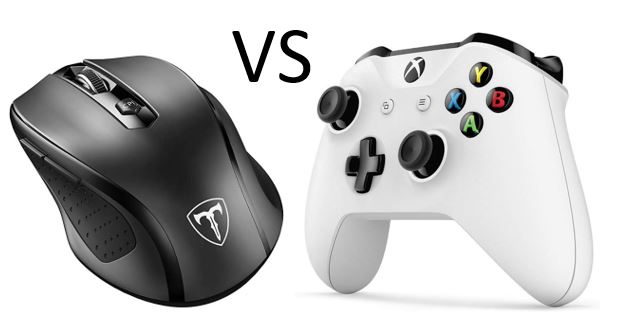 Let me just start this off by saying I have played and enjoyed both console and PC gaming, and do not have a bias either way. Both gaming types each have their advantages and disadvantages that I will go through here to give you a more broad PROspective on this topic. So, in my opinion, here are just 5 main factors to consider when deciding which gaming platform is better:

This one is probably the most obvious difference, as on a console you usually have a controller or remote control/joystick, whereas on PC gaming, most of the time you use your mouse and keyboard as controllers (either using WASD, arrow keys, mouse, or a combination for movement.) Now, you can still use some controllers for PC gaming (Xbox360/One, for example), and a keyboard/mouose combo for consoles, so this is a more versatile attribute.

Both methods of control will give you a different experience in my opinion, as the controller is held in both hands and aiming and such is done with a joystick, whereas PC gaming usually one hand is on the keyboard and the other on the mouse. PC gaming, will allow for faster, sharper aim, but at the same time, if playing multiplayer, it allows the same for the enemies.

Can you imaging playing League of Legends (or other MOBAs) on an XboxOne or PS4? Not likey, as these types of games require too many variable inputs and feel more natural on PC. On the other hand, my preference for any FPS or even TPS would be console gaming, as the controller actually has a trigger which you press when firing any weapon, allowing a greater connect between you and the character you are playing in the game than a click of the mouse does. Albeit, there are many FPS games on PC, and some MOBA’s on console, but in my opinion, these aren’t the optimal platforms for these respective games.

For consoles, most of the “multiple use” is in the form of streaming sites – Netflix, Twitch – that sort of thing. For PC, you can game on it, PLUS have a computer for anything else you would use a computer for (including streaming) – it is a very versatile all in one system in that regard that far exceeds any console created (so far). Plus, if you are like me and don’t have Cable TV because you would much rather just Netflix (and chill?), then have a PC console would be much more cost effective. However, if you like watching movies with your family, friends, or significant other, then maybe a console would be a good idea for you as the streaming is easy to navigate right there!

This isn’t about what games you are into, but rather what ASPECT of those games you enjoy the most. Are you into the 100%-ing the campaign missions, kicking butt in multiplayer, or into awesome stories that captivate you and suck you in. I would choose console over PC if you are heavily into story and campaign, as the console seems to feel like you are more in tune with the story, the characters, surroundings, and everything else. It feels amazing after you complete a brutal 45 minute mission and get that awe inspiring ending cut scene on the bigscreen tv. However, nowadays the competitive scene is moving towards PC gaming vs console gaming, with leaders such as League Of Legends, CS:GO, PUBG, Apex (most of which have a console counterpart that was developed later). So, if you are into multiplayer and showing off your skill against other like-minded players, then PC gaming might be better for you.

Some of you may argue that PC gaming can have better graphics than console – and that is true, don’t get me wrong – but 60fps is pretty nice for console gaming anyway, and honestly for most Gamers (unless professional or hardcore gaming is your thing), you don’t need more than 60fps.

Sorry consoles, but PC gaming has you beat here…There are massive online game libraries, such as Steam, that have as much as 30,000 games on them. These can all be available in your steam library to play whenever you want. This is hardly a comparison to consoles: between all xbox consoles (Xbox, Xbox360, XboxOne) there are roughly 4200 games, and around 8700 for all PlayStation consoles (PS1-4). Furthermore, it is easier to increase your available memory on a computer than it is on a console.

There you have it, these are my opinions on these 2 platforms. It really boils down to your own preference on which you would prefer – remember, having a console might mean sharing the TV with others in your household! Ultimately, for me, I am fortunate enough have both consoles and a PC, so I have the best of both worlds here. I chose this method because a) I love playing FPS on console and grew up with an Xbox360/XboxOne (Halo 3 is STILL my all-time favorite game) and b) because I have some friends that play console, and some that play PC games, so I decided to get both so I wouldn’t have to choose which gaming friends to phase out. It is up to you to decide what is best for you and your lifestyle.

One thought on “Console Gaming vs. PC Gaming: Which is better? – A Gamer’s Prospective”